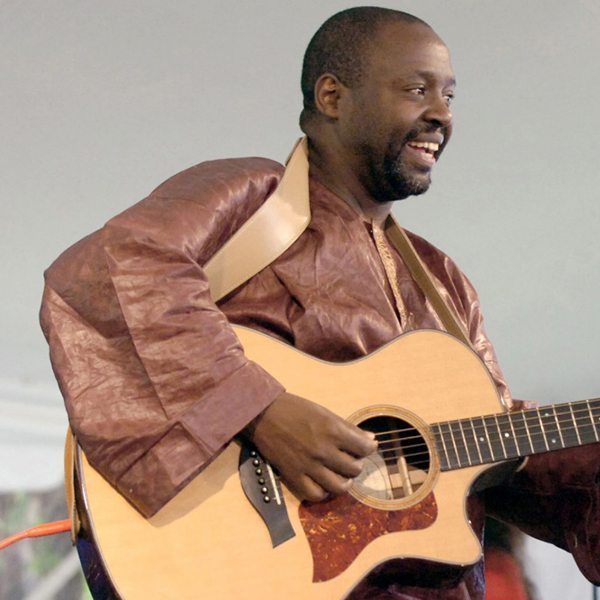 Jean Paul Samputu is a singer, songwriter, and peace activist from Rwanda. He has established himself as one of the most prominent African artists on the world stage. Only Love, his 16th and most recent album, is available on iTunes, and Amazon, among other stores near you.

Having survived the Genocide of 1994 in Rwanda, Samputu went on to win the prestigious Kora Award (the “African Grammy”) for Best African Traditional Artist in 2003, as well as numerous international awards, including the International Songwriting Competition in Nashville, which he won with Psalm 150 that Samputu sang in the traditions of Rwanda’s inkera genre, now available on his album Voices from Rwanda.

In 2004, he was chosen as only one of two African artists to perform at the ‘World Culture Open’ at the Lincoln Centre in New York. He was also invited to perform with his band in front of Angelina Jolie and Condoleeza Rica at the National Geographic Museum in Washington to commemorate World Refugee Day.

Samputu travels the world as a cultural ambassador for Rwanda, bringing traditional African singing, dancing, and drumming, and most importantly, a message of peace, hope, forgiveness, reconciliation, and love. He also continues his efforts to educate young people against genocide through panel discussions and forums at colleges and universities. Samputu’s music testifies to the tragedy as well as to his hopes for the future.

Samputu is the Patron of APIE (A Partner in Education) , a British non governmental organization supporting primary school education in Rwanda.

Also, Samputu is the Patron of Hope in the Heart, a British non-governmental organization involved in “empowering people to improve their lives, communities and world by accepting their challenges, uniting with others and nourishing the spark of hope within.”

Furthermore, Samputu is the Ambassador of Music Action International, a British non-governmental organization that engages with “singing and songwriting to support war and torture survivors find peace through personal expression and collective experience.”